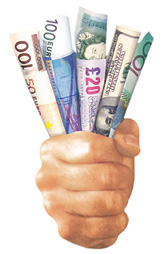 These are official channels. I wonder how much of money was moved using unofficial and illegal methods like hawala.

India has displaced China and Mexico to become the top remittance receiving country in the world, according to latest data released by the World Bank. Indians working in foreign countries sent back over $25.7 billion (roughly Rs 1,28,500 crore) as remittances in 2006, followed by Mexico ($24.7 billion), China ($22.5 billion) and the Philippines ($14.9 billion).

To put the scale of the remittances in perspective, consider this: money received by India through this route is roughly the same as the country’s total estimated annual expenditure on defence, or about five times the estimated expenditure on education in 2007-08. Total income tax and wealth tax collections in the country are less than the remittances received. And they are over three times the foreign direct investment in the country in 2006.

Sheer numbers and relatively higher skill levels appear to be driving the growth in Indian remittances. The World Bank study estimates that the number of Indian immigrants is about 10 million. Mexico and Russia are the top immigrant sending countries with an estimated 11.5 immigrants each.