Next launch of India’s Polar Satellite Launch Vehicle, PSLV-C9, is scheduled to carry India’s latest Remote Sensing satellite, CARTOSAT-2A along with Indian Mini Satellite (IMS-1) and eight nanosatellites from abroad around 9.20 am on Monday, April 28, 2008 from Satish Dhawan Space Centre (SDSC) SHAR, Sriharikota. This will be the thirteenth flight of PSLV and third flight with ‘core-alone’ configuration.

CARTOSAT-2A weighing about 690 kg carries a state-of-the-art Panchromatic camera (PAN) that is capable of taking black-and-white pictures in the visible region of the electromagnetic spectrum. The imagery will have a spatial resolution of about one metre. The camera covers a swath (geographical strip of land) of about 9.6 km. The highly agile CARTOSAT-2A is steerable along as well as across the direction of its movement to facilitate imaging of any area more frequently. CARTOSAT-2A will form a pair with CARTOSAT-2 launched on January 10, 2007 providing more frequent revisit. ?

Indian Mini Satellite-1 (IMS-1) is developed by ISRO. Weighing 83 kg at lift-off, IMS-1 incorporates many new technologies and has miniaturised subsystems. IMS-1 carries two optical payloads – a Multispectral camera (Mx Payload) and a Hyperspectral camera (HySI Payload). Both Mx and HySI payloads operate in the visible and near infrared regions of the electromagnetic spectrum. The resolution of Mx camera is 37 metre with a swath of 151 km while that of HySI is about 506 metre with a swath of 129.5km. The data from this mission will be made available to developing countries. 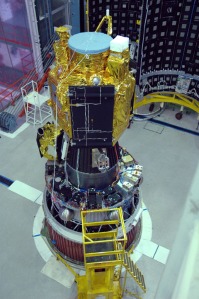 Eight nanosatellites built by universities and research institutions in Canada and Germany are also being launched under a commercial agreement with Antrix Corporation. The weight of these Nanosatellites vary from 3 to 16 kg with a total weight of about 50 kg.

The launch campaign is progressing satisfactorily at SDSC SHAR. The satellite has already been integrated with the launch vehicle and on April 18, 2008, the launch vehicle was moved to the Second Launch Pad at Satish Dhawan Space Centre, Sriharikota.

Above news and pictures courtesy: ISRO