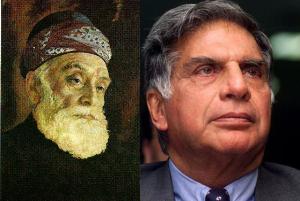 I had sometime earlier read about the British denying of an steel plant to JN Tata in the early 1900s which lead to him starting a steel company in India which finally led to Tata Steel. Today, Ratan Tata, the descendant of the enterprising pioneer has bought over the mega steel company Corus and two of the most iconic British automobile brands (Jaguar and Land Rover). Though Deccan Chronicle might be trying to create a story out of nothing, its still an interesting read.

The low profile Tata chairman, Mr Ratan Tata, has more than avenged the scorn that the British had first poured over his forefather and founder of Tata Steel, Jamshedji N. Tata with the signing and sealing of the deal involving the takeover of the iconic Jaguar-Land Rover brands.

According to history J.N. Tata, a big name in textiles, got the idea of a steel plant when he was on a trip to Manchester. He had set his mind on building a steel plant that would rival the best in the world. But as he found, steel was not as easy as building textile mills.

He had wanted to raise funds for his steel venture but it was met with scepticism by the British who were in the throes of the industrial revolution. As his biographer Frank Harris said Tata found his path blocked at every turn with the curious impediments which dog the steps of pioneers who attempt to modernise the East. There was Sir Frederick Upcott, chief commissioner of the Great Indian Penninsula Railway, who promised to ‘eat every pound of steel rail Tata succeeded in making.’

But Tata persisted and succeeded. In 1900 he met the secretary of state for India, Lord George Hamilton, in England. He was a man in a hurry as he bulldozed his way. He went from there to the US where he consulted Julian Kennedy, a leading metallurgist, and later met Charles Page Pertin who he wanted to take charge of building the plant in India.

Meanwhile, he advised his office in Bombay and it was known then, to obtain prospecting licences. But he passed away in 1904 and the steel plant took its first step in February 1908 when the first stake was driven in. The first blast furnace was blown in on December 2, 1911, and the first ingot was rolled out on February 16, 1912. One does not know if Sir Frederick was around and whether the steel ingots formed part of his diet then.

Now two centuries later, his successor Ratan Tata, literally took Britain by storm when he first took over Corus and then bid successfully for Jaguar-Land Rover. There was the same scepticism about a third world country taking over Corus and JLR. In fact in the US, dealers were appalled that an Indian should be taking over JLR as they thought it would reduce their ritzy luxury qualities. But Tata Motors prevailed and these British brands are now firmly hitched in Tata stable.