As India cranks up the heat, pressure seems to be mounting on Pakistan in the past 72 hours trying to evade the multiple evidences and proof that Pakistan was responsible for the mayhem in Mumbai last week.  Meanwhile, Pakistan even tried to play a game of  hoax call from the external affairs minister of India, Pranab Mukherjee where he reportedly threatened Zardari.  All this just to deflect the pressure and try to play up other angles in a bid to wriggle out of the tight situation it is in. At the end, the call was found to be fake.  I wonder with the kind of communication systems the President of Pakistan uses, I can call up Zaradri tomorrow and say that i want to whip his ass and he might panic and set his armed forces on high alert.

Meanwhile, India has given the names of 3 people to Pakistan and asked them to be extradited.  Also has given Pakistan 48 hours to crack down on the Pakistani home grown terrorist organisation Lashkar-e-Toiba.  The 3 people asked to be extradited are

The Pakistani media tried to put a lot of spin around the Mumbai attacks by trying to point out to some yellow thread around the terrorist’s hands and stuff, but finally in face of mounting evidence and of the testimony of the lone captured terrorist Ajmal Amir Kasab and his family in Pakistan, it seems time is running out for Pakistan.

No one is doubting Zardari and his government’s involvement in the Mumbai attack, but its a known fact that democratically elected government of Pakistan has no locus standi in their country.  The country is virtually ruled by the Pakistani army and their rogue intelligence agency ISI.  Maybe it was all done by the ISI and the Pakistani army without the kowledge of Zardari and his government.  Or maybe, even the plan was hatched and executed by some rogue element of the rogue Pakistani spy agency ISI.  Maybe the head of Pakistani Army and ISI had no inkling of what was happening, but the truth is that the Mumbai attacks were planned, trained, executed and guided by Pakistani nationals.

Zardari can cry hoarse at his innocence, and even if he will act against the  ISI or the Pakistani Army, he would be blown up in another car bomb attack just like his wife Benazir Bhutto was.   Benazir though was no innocent woman. She was responsible for cranking up the terrorism in Kashmir and gave a free hand to the Pakistani Army and their rogue intelligence agency, ISI to foment terrorism in Kashmir.  She ultimately paid for her deeds with her life. 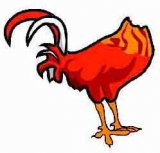 Its precisely what Pakistan is facing today.  The frankenstein monster in the form of Taliban is hitting it from Afghanistan.  The home grown terrorists of Pakistan like Lashkar-e-Toiba, Jaish Mohammad etc are out of their hands.  They have created monsters on which they have no control.  Today Pakistan is like a headless chicken running around with nuclear weapons in its hands.  A perfect failed state with a rabid fundamentalist Islamic terror having taken root and spread its venom in the society.  Terrorists running amok.  Shia and Sunnis blowing each other up.  The Army and ISI behaving as a state within a state.  The PPP led government of Zardari has no say in the running of the country.

Its in such times that i envy countries like the US, Australia or the Europe for the kind of neighbours each one of them has.  Each one progressive, democratic, an army that stays in the barracks and not tries to govern, liberalism, freedom of speech, dynamic economies, people who are busy trying to make a better life for themselves and for others. And then look at the sub-continent.  We got nut cases in the form of Pakistan, Bangladesh who themselves have no future but find great happiness in troubling their neighbours.