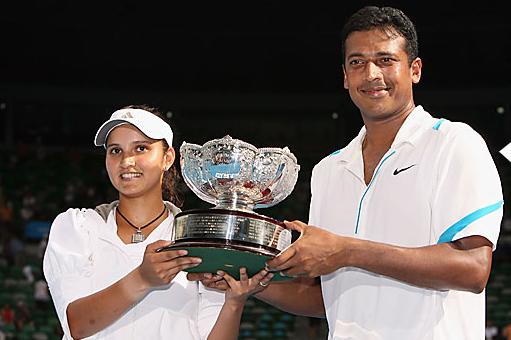 Sania Mirza and Mahesh Bhupathi won the mixed doubles title at the Australian Open, beating Nathalie Dechy (France) and Andy Ram (Israel) 6-3, 6-1 in the final in Melbourne on Sunday afternoon. The ace Indian pair thus made up for the disappointment of last year when they were beaten by Tiantian Sun and Nenad Zimonjic in the final.

While Sania picked her maiden Grand slam title in the process, Bhupathi swelled his Grand Slam title collection in mixed doubles to seven. Before Sunday’s triumph he won six mixed doubles crowns with different partners, the last also at the Australian Open in 2006 when he had partnered Swiss Martina Hingis.

Sania and Bhupathi had an easier time than they may have expected. Ram was broken in the opening game and from then on there was nothing the French-Israeli pair could do to stop the Indians. Two more breaks, in the seventh and ninth games, and Sania and Bhupathi had the first set in their bag in 28 minutes.

The second set too was one-sided. Bhupathi kicked it off, winning at love. Then a break on Dechy’s serve put the Indians high in the saddle at 3-1. Another break off Ram’s serve and the Indians were cruising at 5-1. Sania completed the formalities by serving out the seventh game for the set and match in 54 minutes.

On Saturday, Bhupathi and his Bahamian partner Mark Knowles squandered a one-set lead and went down to Bob and Mike Bryan in the men’s doubles final.

Above picture from: Australian Open & news from Rediff