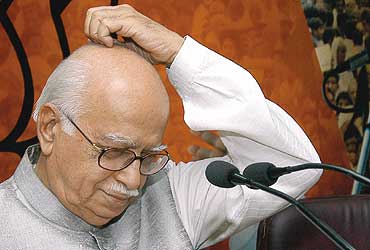 Our fake ‘Iron Man’ and the eternal Prime Minister in waiting, LK Advani has fallen for a simple internet hoax.  Ya, the same kind of hoax mails that propagate that 30% of all Indians populate NASA, that 25% of all Microsoft employees are Indians etc..

Read Manish’s post as he busts the hoax that is popularly going round on the internet mentioning that almost US$ 5.7 trillion of Indian cash is being hoarded in Swiss banks and that he will bring them back to India.

Self-appointed Prime Minister Lal Krishna Advani apparently is too excited about the Internet.  He suddenly is receiving chain mails like all of us – and has decided the government policy should be decided based on these email forwards.

Mr.Advani now wants all black money stashed away in Swiss banks by Indians brought back. And he promises to do that if he comes to power. Well,  how a man who couldn’t negotiate a few hijackers – will arm-twist Swiss bankers is beyond me.

We have such morons staking claims for the next PM’s gaddi.  I have always believed that leaving the Prime Minister’s reigns in the hands of a communal Advani (the one responsible for all the communal blood letting in India with his rath yatras) is foolhardy.  And now, with these comments, the belief that he is not only communal, but also a nutcase is only confirmed.