In the IPL and cricket mania, its very difficult to find more information about such a sport.  A stupendous effort by the players inspite of the fact that their effort gets no recognition in the Indian press. 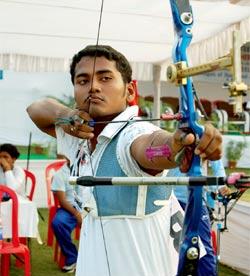 This was the trio’s second consecutive team gold after bagging the first at Santo Domingo World Cup Stage 1 on April 5. India had beaten Great Britain in Stage 1 final.The trio had bagged India the first team gold in World Cup series winning at Antalya (Turkey) in 2008. This was followed by two more already this year.

Talukdar also won his third head-to-head contest against the Italian Galiazzo, all played at Porec. He first tamed Galiazzo in 2006 on way to the gold medal, and again beat him in 2008 and now in the final today. Talukdar held the lead in the first two ends of three arrows each at 55-52. He surprisingly conceded two points in the third end to allow the Italian to narrow the gap to 81-82. 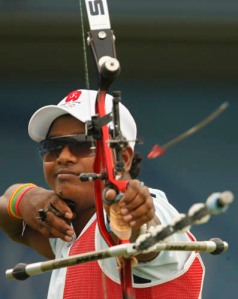 When Galiazzo hit an eight with his second arrow of the final end of the three arrows, the Indian needed a nine to win. Talukdar hit a 10 to take the second crown in Porec. The women’s recurve team, however, failed to clinch the bronze medal losing the play-off to Ukraine 197-212.

In the men’s team summit clash, Russia trailed by one point (54-55) in the first end, recovered in the second end to tie the match at 108 points at halfway mark. However, India took the lead in the third end at 164-162. Russia showed their best in the last end, but it was not enough to beat the Indians. 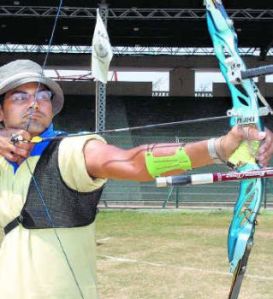 The Ukrainians tied the match at 100 points and took the lead in the third end at 154-150. The last end for India was stressful as the last arrow slipped from the arrow rest as Ukraine eves settled the issue. Archery Association of India president VK Malhotra and secretary general Paresh Nath Mukherjee congratulated the winners.