“School days” inexorably continue at the Gross household, not just because of grandchildren, but because of the necessity to teach my own kids the complexities and pitfalls of investing. As I get older, I fear I may unduly introduce them to a 1930s Will Rogers warning about losing money: “I’m not so much concerned about the return on my money,” he wrote, “but the return of my money.” “Don’t lose it” is my first and most important conceptual lesson for them despite the Trump bull market and the current “animal spirits” that encourage risk, as opposed to the preservation of capital. 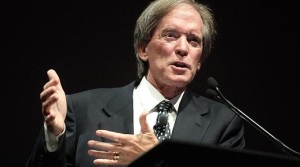 Recently I also explored with them the concept of financial leverage – specifically that of fractional reserve banking, which has been the basis of credit and real economic growth since the system was blessed by central banks over a century ago. “It still mystifies me,” I told them, “how a banking system can create money out of thin air, but it does.” By rough estimates, banks and their shadows have turned $3 trillion of “base” credit into $65 trillion+ of “unreserved” credit in the United States alone – Treasuries, munis, bank loans, mortgages and stocks too, although equities are not officially “credit” they are still dependent on the cash
flow that supports the system.

But I jump ahead of myself. “Pretend,” I told the “fam” huddled around the kitchen table, that there is only one dollar and that you own it and have it on deposit with the Bank of USA – the only bank in the country. The bank owes you a buck any time you want to withdraw it. But the bank says to itself, “she probably won’t need this buck for a while, so I’ll lend it to Joe who wants to start a pizza store.” Joe borrows the buck and pays for flour, pepperoni and a pizza oven from Sally’s Pizza Supplies, who then deposits it back in the same bank in their checking account. Your one and only buck has now turned into two. You have a bank account with one buck and Sally’s Pizza has a checking account with one buck. Both parties have confidence that their buck is actually theirs, even though there’s really only one buck in the bank’s vault.

The bank itself has doubled its assets and liabilities. Its assets are the one buck in its vault and the loan to Joe; its liabilities are the buck it owes to you – the original depositor – and the buck it owes to Sally’s Pizza. The cycle goes on of course, lending and relending the simple solitary dollar bill (with regulatory reserve requirements) until like a magician with a wand and a black hat, the fractional reserve system pulls five or six rabbits out of a single top hat. There still is only one dollar bill but fractional reserve banking has turned it into five or six dollars of credit and engineered a capitalistic miracle of growth and job creation. And importantly, all lenders of credit believe that they can sell or liquidate their assets and receive the single solitary buck that rests in the bank’s vault. Well . . . not really.

“And so,” my oldest son, Jeff, said as he stroked his beardless chin like a scientist just discovering the mystery of black holes. “That sounds like a good thing. The problem I’ll bet comes when there are too many pizza stores (think subprime mortgages) and the interest on all of the loans couldn’t be paid and everyone wants the dollar back that they think is theirs. Sounds like 2008 to me – something like Lehman Brothers.” “Yep,” I said, as I got up to get a Coke from the refrigerator. “Something like Lehman Brothers.”