“To make teaching endurable, it has to have enough wiseassery in it. And we do.” “We’ve done a lot of preaching [about investing] to not much effect.” “To the extent you’re working on it, you’re on the side of angels, but lots of luck.”

Munger has tapped into something that makes his ideas both memorable and understandable. He is suggesting in these sentences above that part of his success as a teacher is that he injects a certain amount of “wiseassery” into his delivery. The dictionary definition of wise ass is: “a person who is irritating because they behave as if they know everything, often in a way that is quite humorous but potentially insulting.” While a wiseass may be an effective teacher, Munger once suggested that he does not make for a good role model since what he says is often too controversial which can create significant problems. But the world would be a dreary and less interesting place if there wasn’t someone in it who said things like: 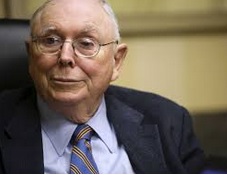 “I don’t think I’m a good example to the young. I don’t want to encourage people to follow my particular path. I do not want a proctologist who knows Schopenhauer, or astrophysics. I want a man whose specialized. That’s the way the market is. And you should never forget that. On the other hand, I don’t think you’d have much of a life if all you did was proctology.”

To be a wise ass in public in the cause of educating the public requires a rather thick skin, which Munger clearly has. His willingness to say the truth out loud is a needed antidote to somethings that are wrong in the world today. Munger has also said that what brought he and Warren together as friends and business partners Munger was that they are both “natural wiseasses. I’m not the only wise ass in the world. Warren can find another one.”

Teaching people anything, particularly about investing, is hard. Charlie has said that he has trouble getting his own family to follow value investing principles so he has little hope of his ideas being widely adapted. I think Munger understates his influence, but it may be true that he has helped more people improve the way they think than the way they invest. One final Munger thought on teaching is: “I think the only way you’ve got a chance is sort of by example. If you want to improve your grandchildren the best way is to fix yourself.”

One last point here I can’t resist. I know a blogger who Tweeted recently that he was responding to “hate mail.” He is a nice fellow who is trying to teach people a few things. That people are sending him hate mail is bullshit. Debating ideas is one thing but hate is quite another. People who are haters are often making up for something. like being teased in middle school for having small hands. The unfortumate reality is that you need to either have think skin like Munger or quit blogging/ tweeting/writing. “Haters gonna hate” is the sad truth. It is an advantage to not give a damn what people say. I like this from Felicia Horowitz:

Read rest of the gems here