Rarely do proxy fights look as similar to a Rocky sequel than the mine continuing to play out between Nelson Peltz and Procter & Gamble. Weeks after P&G declared the effort by Peltz to gain a board seat a failure, he jumped off the mat to land a knockout punch after an independent tally discovered that Peltz’s hedge fund, Trian, had in fact won the fight.

While P&G continues to review the results, it appears that Peltz, with an unofficial winning margin of .0016% of outstanding shares, will have a spot on the board. It’s an unlikely victory in the most expensive activist battle to date, at the largest company yet to be targeted by an activist.

For P&G investors, though, it doesn’t mean immediate results will follow. Fortune and FactSet recently looked at how companies facing activist investor campaigns performed since 2012. The research found that two years following an activist win, companies had a median stock price loss of 2.4%, while companies that fend off such campaigns saw their shares rise 10.9%. There are many factors that could explain the results, not least that the companies that tend to attract activist campaigns often face problems that take longer than two years to solve. Still, it’s interesting that evidence of weak returns hasn’t kept the number of activist campaigns from growing (the number of campaigns in 2017 so far is 18% than the number in 2012), or dimmed other shareholders’ enthusiasm for them. 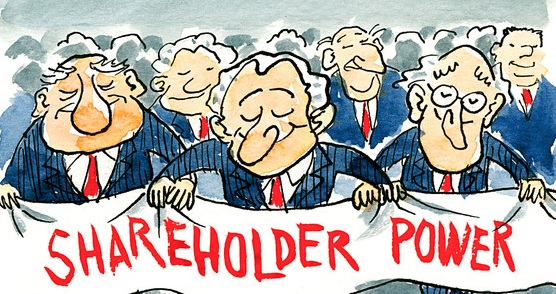 The explanation for activisms’ increase might lie in how we invest.

It’s no secret that investors have begun shifting their emphasis to passive investing in index funds or ETFs, and away from actively managed funds. Last year, passive funds saw $506 billion in net inflows, while $341 billion left active hands. And Moody’s Investors Service predicts that passive investing, which currently accounts for 29% of U.S. assets under investment management, will surpass active strategies no later than 2024. It’s a transition that’s bringing trillions of dollars under the umbrellas of the management companies that run the index funds and ETFs.

These funds, however, are typically bound by rigid rules when it comes to where you can invest. If you buy an S&P 500 index fund, your money will typically be invested in each of the companies within that index, regardless of whether certain names perform poorly—or are poorly run. Investments are doled out schematically, without a need to evaluate a company’s culture or strategies or plans. And some researchers argue that the growing dominance of that style of investing means that, at many companies, the biggest investors don’t have much of an incentive to dig deep into why a specific company is underperforming, and how they might fix it.

Because of the way index investing works, big management groups like Vanguard or BlackRock wind up taking gigantic stakes in sectors, not just an individual company. It’s sometimes called horizontal investing or common ownership, because the companies have nearly the same exposure to a number of names within one sector. In P&G’s case, three companies (or subsidiaries) – Vanguard, State Street and BlackRock – are among its five largest investors. The same three firms have similar status in P&G’s closest competitors, like Colgate-Palmolive or Kimberly-Clark.

This isn’t unique to P&G. Indeed, researchers have estimated that either Vanguard, State Street, or BlackRock is the largest shareholder in 40% of U.S. public companies.

Some researchers think that this cross-ownership makes companies in the same industry less likely to compete strenuously with each other. Studies have found that horizontal or cross ownership of airlines has been correlated with consistent price increases and a shrinking likelihood that one carrier will undercut the other’s profits with aggressive discounts. Research has found that the same goes for banking fees. “The omission to explicitly demand or incentivize tougher competition between portfolio firms may allow managers to enjoy a ‘quiet life,’ and thus cause an equilibrium with reduced competition and sustained high margins,” write researchers Jose Azar, Martin C. Schmalz, and Isabel Tec in their recent findings on the anti-competitive impact of common ownership. The sector may benefit, but individual companies don’t look to maximize their own value or seek market share gains.

Breaking from the pack

Activist investors, in contrast, are more likely to dig into a specific company and determine “how to improve it,” says Ali Dibadj, a Bernstein analyst. They tend to make concentrated bets in an individual company, then become the vociferous voice telling management that changes must occur. (For an example of a company that’s been particularly successful in doing so, see Fortune‘s new story about Elliott Management.)

Activists see a real threat in too much passive ownership. “The Japanese system of cross corporate ownership, the keiretsu, has been blamed for decades of Japanese corporate underperformance and economic malaise,” activist Bill Ackman, the founder of Pershing Square hedge fund, wrote in 2015. “Large passive ownership of Corporate America by index funds risks a similar outcome without the counterbalancing force of large active investors.”

Index funds, of course, can benefit if an activist campaign boosts performance at a company they own. And these firms sometimes vote in activists’ favor: In fact, BlackRock and State Street reportedly sided with Peltz in the P&G fight. But the P&G case does highlight some reasons why individual investors may embrace an activist. Peltz, after all, isn’t a top shareholder in any of P&G’s competitors, so he’ll focus on what P&G needs to improve itself, as opposed to how the overall sector performs.

Of course, if there aren’t more voices doing the same, that may be an unfortunate side effect of the value we find in index investing.