A scandal threatens to put the brakes on Japan’s plan to build the world’s fastest train. To surpass the nation’s famous bullet train, the project incorporates magnetic-levitation technology that promises to cut journey times from Tokyo to Osaka by more than half, to just over an hour. The $80 billion project carries the government’s added hopes of exporting the maglev technology.

It centers on possible collusion on contracts for the project by four of the giants of Japan’s construction industry — Kajima Corp., Shimizu Corp., Obayashi Corp. and Taisei Corp. The Tokyo District Public Prosecutors Office and the Japan Fair Trade Commission raided their headquarters earlier this month following reports that the four companies were under investigation for possible antitrust violations related to maglev contracts. All four firms acknowledged the raids and said they’re cooperating with authorities. On Dec. 19, the Yomiuri newspaper reported that Obayashi had admitted to the FTC that it colluded with the three others. An Obayashi spokesman declined to comment. 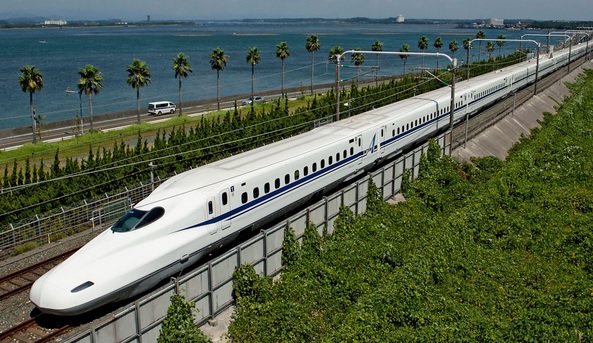 2. How did the collusion allegedly play out?

The contractors are suspected of having conspired to decide in advance which of them would win orders and at what prices, meeting regularly to discuss bids, Japanese media including Sankei newspaper have reported. The companies prompted suspicions by each winning about the same number of orders, according to reports. A former Taisei executive is suspected of being the mediator in the collusion, passing on details of the project obtained from an acquaintance at Central Japan Railway Co., which is running the project, Asahi reported on Dec. 26. A Taisei spokesman declined to comment on the report.

3. What is magnetic levitation exactly?

Maglev trains use magnetic power to float carriages, eliminating the friction of tracks. The trains set off on wheels (the kind used on F-15 fighter jets) until there’s enough speed for the magnets to kick in and create lift. China already operates a maglev over a short route in Shanghai, but the Japanese work-in-progress is on a much larger scale. During a trial in 2015, Japan’s project set a world speed record for a train — 603 kilometers an hour (375 miles an hour).

Don’t line up for tickets just yet. Central Japan Railway, known as JR Central, is running the project and began construction in 2015, but the first leg — from Tokyo to Nagoya — isn’t scheduled to open until 2027. The second stage, to Osaka, is planned for 2045, though the government is providing a loan to try to bring that forward by eight years.

5. Why is the project so important for Japan?

The government has hailed the project as “Japanese technology that will revolutionize intercity transport.” It sees maglev as a highly exportable revenue generator, with foreign dignitaries frequently taken on rides at a test line near Mount Fuji. Prime Minister Shinzo Abe has said his government may provide financing to JR Central’s bid to provide trains for a proposed Washington-Baltimore line. Japan’s interest in maglev technology dates back to the 1960s, about the time when bullet trains first appeared.

6. Why has it taken so long to develop?

As well as the cost, there are technical challenges. Such as tunneling through the Japanese Alps. Or making the train line straight enough to accommodate maglev’s speed. To achieve that goal, JR Central has to dig some 246 kilometers of tunnels for the first leg — almost five times the length of the Channel Tunnel linking Britain and France.

7. What’s at stake in the collusion allegations?

Other than another black mark for Japan Inc. in a year when manufacturers admitted faking data, there’s a risk that the project will face delays. The contractors under suspicion constitute all but one of the so-called super zenecon, or super general contractors, that dominate Japan’s construction market. The super zenecon are said to be the only companies with the capacity to handle large-scale projects with the technical precision required. Tunnel-building would face a serious obstacle if the investigation were to jeopardize their involvement, industry experts say. Many see such far-reaching consequences as unlikely, however. Transport Minister Keiichi Ishii has declined to comment on the possibility of delays.

8. What’s at risk for the companies?

The worst-case scenario is a criminal conviction against the companies and their executives, according to Daiske Yoshida, a Tokyo-based partner at Latham & Watkins LLP. While Japanese authorities rarely prosecute cartels, criminal charges were filed against three of the nation’s ball-bearing makers in a price-fixing case earlier this decade. Shares in the four construction firms fell as much as 10 percent in the days following the first reports, but investors don’t seem overly concerned. “The market isn’t having a big reaction,” said Minoru Matsuno, president of Tokyo-based investment adviser Value Search Asset Management Co. “There is a feeling that the market accepts that for this type of large-scale project, bid-rigging is a necessary evil.”