Wandering the streets of Shanghai to admire the architecture, the head of one of the largest U.S. consumer banks recently found himself surrounded by a gaggle of teenagers. Entranced by their phones, they hardly made way for the banker. The teens were messaging, shopping and sending money back and forth, all without cash. Instead, they were using Alipay and WeChat. The scary thing for the American: Banks never got a cut.

The future of consumer payments may not be designed in New York or London but in China. There, money flows mainly through a pair of digital ecosystems that blend social media, commerce and banking—all run by two of the world’s most valuable companies. That contrasts with the U.S., where numerous firms feast on fees from handling and processing payments. Western bankers and credit-card executives who travel to China keep returning with the same anxiety: Payments can happen cheaply and easily without them.

Alibaba Group Holding Ltd. created Alipay in 2004 to let millions of potential customers who lacked credit and debit cards shop on its vast online marketplace. Tencent Holdings Ltd., similarly, debuted its payments function in 2005 in a bid to keep users inside its messaging system longer. 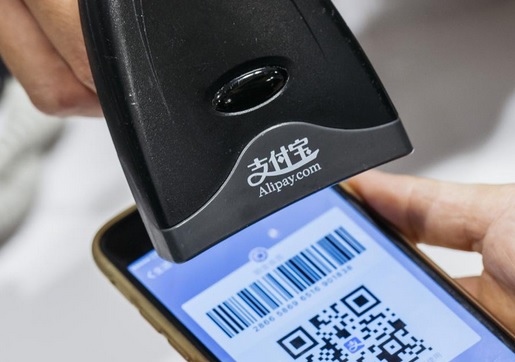 Alipay and WeChat have since swelled in popularity, boasting 520 million and 1 billion monthly active users, respectively. Consumers sent more than $2.9 trillion inside the two systems in 2016, equivalent to about half of all consumer goods sold in China, according to the payments consultancy Aite Group.

In contrast, U.S. consumers still rely on banks for most non-cash payments—whether it’s by check, debit, credit or a growing number of other payment systems tied to their bank accounts. Connected to that is a universe of wallets and payments systems operated by the likes of PayPal Holdings Inc., Apple Inc. and Alphabet Inc.’s Google. From the perspective of merchants, too much of the U.S. system siphons off enormous amounts of money.

For now, no company in the U.S. commands the kind of clout that Alipay and WeChat wield back home. Instead, everyone is trying to replicate their success.

“This is going to be the battle of all time—like who dominates all those services—and it’s still not known,” Jamie Dimon, chief executive officer of JPMorgan Chase & Co., told his company’s investors in February. “Everyone wants to be the place that is the one place you go to do that.”

The nightmare for the U.S. financial industry is that a technology company—whether from China or a homegrown juggernaut such as Amazon.com Inc. or Facebook Inc.—replicates the success of Alipay and WeChat in America. The stakes are enormous, potentially carving away billions of dollars in annual revenue from major banks and other firms. What follows is a breakdown of what that could look like—theoretically—using the explosive growth as China’s apps as a rough guide.

Perhaps the clearest opportunity lies in siphoning off some of the fees that U.S. merchants pay to accept cards and mobile payments—about $90 billion a year, according to the Nilson Report, an industry newsletter. That money gets parceled out to card networks such as Visa Inc. and Mastercard Inc., payment processors and banks, which pocket the largest share.

In China, analysts expect third-party payment providers to earn about 40 percent of such fees by 2020. If apps were to start grabbing market share in the U.S. at roughly the same rate they did in China, it would take a $43 billion revenue bite out of a business banks count as among their most profitable.

But that’s just one way that U.S. banks impose fees. They also generate revenue by dispensing cash. If payments apps were to replace paper money—as they have in many situations in China—another form of income could take a big hit.

Soon, U.S. bank executives won’t have to travel far to see China’s systems up close. Alipay, owned by Jack Ma’s Ant Financial, has spent the better part of the past year inking deals with payment processors that will allow it to bring its technology to America. Already, many New York taxis offer it as a payment option to customers.

So far, Alipay has said the expansion is meant to help Chinese tourists, and that it’s focusing on cities they tend to visit. But few in the payments industry believe it will stop there.

Meanwhile, Chinese consumers are starting to park more of their savings with the apps. In 2013, Alipay began offering money-market accounts. By last year, it had built that business into the world’s largest money-market fund with about $243 billion. For banks, that’s yet another bite. They traditionally hold customer deposits and use that money to fund loans—generating significant profits. If U.S. consumers were to start storing their extra cash with apps, banks would have to find an alternate—probably more expensive—source of funding.

To be sure, U.S. banks have formidable advantages on their home turf. They have longstanding relationships with their customers, many of whom still like ‘visiting their money’ at a local branch. Consumers love credit card rewards programs and other perks, which have gotten sweeter in recent years, as well as the ability to charge back purchases that don’t go well. And U.S. bank deposits are backed by the Federal Deposit Insurance Corp.

Still, banks and payment networks have a lot to lose if technology firms succeed in grabbing market share—and there are signs that Alipay and WeChat aren’t the only firms that may flex their muscles. Amazon is said to be interested in offering its own product to mimic checking accounts while offering to lower costs for retailers who use its online payments service.