It started with a simple battery. Around 2009, Amazon quietly entered the private label business by offering a handful of items under a new brand called AmazonBasics. Early offerings were the kinds of unglamorous products that consumers typically bought at their local hardware store: power cords and cables for electronics and, in particular, batteries — with prices roughly 30 percent lower than that of national brands like Energizer and Duracell. The results were stunning. In just a few years, AmazonBasics had grabbed nearly a third of the online market for batteries, outselling both Energizer and Duracell on its site.

Inside Amazon’s Seattle headquarters, that success raised a tantalizing possibility. If, with very little effort, Amazon could become a huge player in the battery market, what else might be possible for the company?

Anyone who spends much time on the Amazon site can see the answer to that question. The company now has roughly 100 private label brands for sale on its huge online marketplace, of which more than five dozen have been introduced in the past year alone. But few of those are sold under the Amazon brand. Instead, they have been given a variety of anodyne, disposable names like Spotted Zebra (kids clothes), Good Brief (men’s underwear), Wag (dog food) and Rivet (home furnishings). Want to buy a stylish but affordable cap-sleeve dress? A flared version from Lark & Ro ($39), maybe in millennial pink, might be just what you’re looking for. 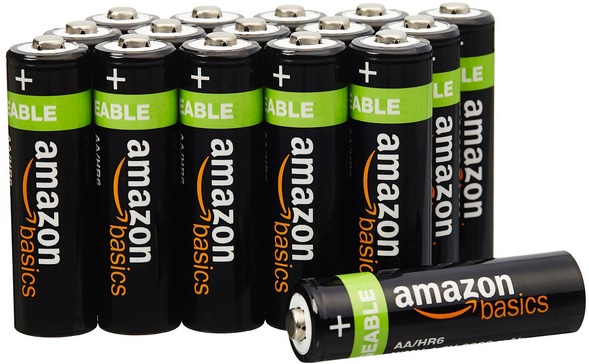 On the surface, the move into the private label business (in which goods are sold under the retailer’s name rather than that of an outside vendor) appears to be a deft move by Amazon. Analysts predict that nearly half of all online shopping in the United States will be conducted on Amazon’s platform in the next couple of years. That creates a massive opportunity for Amazon to more than double revenue from its in-house brands to $25 billion in the next four years, according to analysts at SunTrust Robinson Humphrey. That’s the equivalent of all of Macy’s revenue last year.

Furthermore, in an effort to incentivize shoppers to sign up for the Amazon Prime program (which now costs $119 a year, up from $99 a year ago), certain of Amazon’s private-label products, such as its Goodthreads men’s khakis or Wag’s salmon-and-lentil dog food, can be purchased only by Prime customers.

“Amazon started very slowly in private label,” said Youssef Squali, a managing director of internet and digital media research at SunTrust. “Quite frankly, we think our estimate for the size of the private-label business is conservative,” he added.

Amazon declined to make any of its executives available for this article, but in a response to a list of questions, the company said its overarching goal is to provide customers a wide range of products and brands.

“We take the same approach to private label as we do with anything here at Amazon: We start with the customer and work backwards,” the company said in its statement.

Amazon is hardly alone in its charge into private label. Big-box retailers like Walmart and Target have been offering store brands for years and are also racing to start more private labels, particularly in apparel.

But Amazon holds a unique position in the global marketplace. From its beginnings in 1994, Amazon’s platform was designed to democratize retail. Small vendors or manufacturers could sell outdoor grills, computer bags, and children’s toys alongside established brands. Now, with its expansion into private label, Amazon has shifted away from being an impartial, may-the-best-product-win distribution partner to being a direct competitor to those other vendors.

It’s not just lower prices that are driving Amazon’s customers to its private-label goods.

Amazon is utilizing its knowledge of its powerful marketplace machine — from optimizing word-search algorithms to analyzing competitors’ sales data to using its customer-review networks — to steer shoppers toward its in-house brands and away from its competitors, say analysts.

And as consumers increasingly shop using voice technology, the playing field becomes even more tilted. For instance, consumers asking Amazon’s Alexa to “buy batteries” get only one option: AmazonBasics.

The emerging private label threat from Amazon presents a quandary for small vendors and big, national brands alike. Even as Amazon takes away market share and eats into their profit margins, they have little choice but to continue to sell on Amazon’s platform in order to get themselves in front of millions of potential customers.

“I think, effectively, you have a company that has conspired with about a billion consumers and technology to destroy brands,” argued Scott Galloway, a founder of business research firm now called Gartner L2 and a professor of marketing at New York University Stern School of Business, in a presentation last year. “Their attitude is that brands have, for a long time, earned an unearned price premium that screws consumers.”

But as Amazon uses its powerful platform to bolster its private-label business, there is also debate in legal circles whether some of its activities could be viewed as monopolistic in nature. Some say Amazon could face a legal challenge akin in size and scope to when the Department of Justice two decades ago filed antitrust charges against Microsoft for bundling its own browser into its software, making it difficult for consumers to install a browser from Microsoft’s top competitor, Netscape. Microsoft lost that court battle.

“I think there is a potential monopolization case against Amazon,” said Chris Sagers, an antitrust professor at the Cleveland-Marshall College of Law in Ohio. “The Amazon marketing people are geniuses. They’re brilliant,” Mr. Sagers said. “But if they are getting massive penetration in the market and preventing customers from buying products from their competitors? Well, it’s like they’re writing the plaintiff’s complaint for them.”

In an emailed response, a spokeswoman for Amazon said the company is “a small fraction of a very large and vibrant global retail industry, and the competition and invention happening across retail is great for customers.”
A Crowded Marketplace

Type the word “batteries” into Amazon’s search bar and the first thing that will catch your eye is a large sponsor ad running across the top of the screen for Energizer, featuring its ubiquitous drum-playing pink bunny.

But after that, the screen is filled with offerings for AmazonBasics batteries, many flagged with badges that denote them as a “best seller” or “Amazon’s Choice,” a designation for items that are highly rated and have low customer returns.

Energizer would not say how much it pays Amazon for the banner advertising, but several people with knowledge of Amazon’s pricing say some large brands are spending six figures each month advertising their products on Amazon’s platform even as Amazon’s private-label products are crowding them out.

Are the big brands fighting a battle that may be impossible for them to win?

For more than two decades, shoppers perusing the aisles of Walmart have run into cans of Sam’s cola or coffee alongside national brands on the shelves. In Costco, shoppers can pickup store-brand Kirkland paper towels and bacon. (Store brands are typically priced well below their big-brand peers because they do not spend money on expensive national marketing campaigns like Procter & Gamble or Kimberly-Clark.)

But now, Amazon and many of these big-box retailers are increasing their private-label efforts. In the past year, sales of in-house labels of food and nonfood goods at brick-and-mortar stores grew more than 4 percent, while sales of name brands were flat, according to data from Nielsen’s Total Food View research.

For Amazon, the starting line for deciding what goods or products to replicate for an in-house brand is not that different than what happens at retailers like Target or Walmart. They look at what is selling online and figure out if they can manufacture it cheaper.

Commodity goods like paper towels, exercise mats, and power strips can be easily cloned at a fraction of the cost. In other cases, particularly apparel, Amazon may use private-label goods to fill a gap if clothing manufacturers or high-end designers are unwilling to sell on their platform.

Shoppers looking for Ralph Lauren polos or button-down oxford shirts won’t find them sold directly on Amazon, for example. But they will find Amazon Essentials polos in a rainbow of 16 shades, priced at $12, or oxfords by its Goodthreads label for $25.

Read the rest of the interesting article here