Bear markets can be brutal. When stock prices fall and take your portfolio value with them, it can feel like the end of all that’s right in the world. But bear markets don’t need to be the annihilation they may appear. If you know what to expect and are properly prepared, you won’t suffer investment losses as steep as the overall market.

Here’s what you should know about bear markets:

A bear market is typically defined by a 20 percent drop in a major U.S. index like the Dow Jones Industrial Average or the S&P 500 from its most recent high. To make pinpointing the most recent high easier, some experts will qualify “most recent” with specific time periods, such as most recent high within the previous 52-weeks or the previous two months. The high and subsequent fall can be measured by closing or intraday prices, so some measures may indicate a bear market when others don’t, says Kate Warne, an investment strategist with Edward Jones in St. Louis. Likewise, some indices may enter a bear market when others don’t. 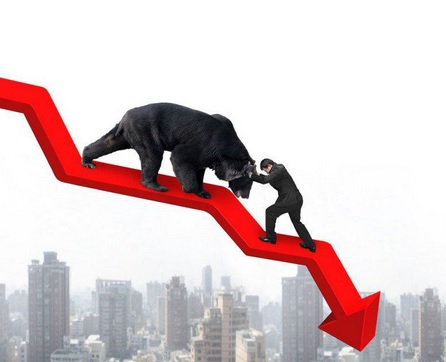 At Personal Capital, they think most people should be invested globally and as such should take a global perspective of bear markets, says Craig Birk, chief investment officer Personal Capital in San Francisco. They use global indices like the FTSE All World Index and the MSCI All World Index to measure bear markets, which investors can track with ETFs like the Vanguard Total World Stock ETF (ticker: VT).

While the technical definition calls a bear market a decline of 20 percent or more, in reality, bear markets are about more than how far markets fall. “In the real world, the definition of a bear market is less important than the impact,” Birk says. “And impact is both magnitude and duration.” A 20 percent decline followed immediately by a rally doesn’t have the same impact as a sustained downturn. For this reason, experts like D. Keith Lockyer, investment market manager at PNC Wealth Management, wouldn’t cry bear until the markets have been in decline for a couple months. Bear markets can last weeks or years. If returns remain dampened for decades, even if there are small rallies in between, it’s categorized as a secular bear market. Anything less than 10 years is called a cyclical bear market.

A bear market ends when the index begins to climb from its most recent low. Since it’s impossible to pinpoint the bottom until we’re well clear of it, Warne wouldn’t declare a bear market over until the index has risen 20 percent from its new low. Even if stocks rise 10 percent after their 20 percent drop, we’d still be in a bear market, she says. Until we reach the new 20 percent market, people tend to categorize it as a “new bull market,” Birk says.

The difference between a bull and bear market is quite simply the difference between up and down. A bear market is a condition of falling stock market prices while a bull market is defined as rising stock market prices. A rising stock market is “bullish,” while a falling one is “bearish.” The two are named for the way their animal namesakes attack: Bears sweep down with their paws while bulls attack by thrusting their horns upward. Since 1926, the average bull market lasted 9.1 years and generated average cumulative returns of 480 percent, according to research by First Trust Portfolios L.P. The average bear market lasted a mere 1.4 years with average cumulative losses of -41 percent.

“This is why investors shouldn’t try to sell ahead of a bear market,” Warne says. Bear markets “are severe and unpleasant but they’re also short compared to bull markets. There’s the concern you won’t be able to reinvest in time for the bull market.” The only thing worse than losing money with everyone else, is seeing everyone else making money without you.

Bear markets are also distinct from corrections and declines. A correction is defined by a 10 percent or more decline from an index’s most recent peak. Anything less than a 10 percent decline gets lumped into “dip” territory.

So to distinguish a bear market from a correction and a dip:

Corrections happen on average once per year but can come much more often. The S&P 500 experienced multiple corrections in 2018, the most severe being the one that nearly brought it to its knees over Christmas. Bear markets occur on average once every three or four years, Warne says. While both corrections and bear markets can be jarring for investors, they’re a natural part of the market cycle.

Bear markets are to be expected, but they’re nearly impossible to predict. There’s dozens of indicators people use to predict bear markets, but none of them are very reliable, Warne says.

Lockyer says some of the causes of a bear market can be:

Any one of these can cause investors to become pessimistic and spark a bear market. However, a bear market can also occur with none of the above. Unsurprisingly, the causes of bear markets are the same ones that can prompt a recession.

Bear markets are commonly associated with recessions, but the two don’t always go together. “When you have a bear market, negative sentiment (among investors) drives stock prices lower and that can start to affect (consumer) confidence,” Lockyer says. “If confidence weakens, spending can decrease, which may slow the economy and lead to a recession.”

Recessions are another natural, if unsavory, part of the business cycle. While bear markets occur in stock markets, recessions occur in the broader economy.

The National Bureau of Economic Research defines a recession as a significant decline in economic activity for more than a few months. In practice, a recession is generally measured by negative growth in gross domestic product for two or more consecutive quarters.

The stock market generally leads the economy by six to 12 months – when investors guess right, that is. Only seven of the 13 bear markets since World War II have actually led to a recession within 12 months. When the stock market did predict right, recessions followed bear markets by eight months on average.

How to Invest in a Bear Market

Bear markets may predict recessions 55 percent of the time, but there’s still no surefire way to predict bear markets. “If markets were predictable, it’d be a lot easier to be an investor,” Warne says. And where would the fun be in that?

Since there’s no way to know when a bear market will occur or how long one will last, preparation is the best bear market strategy. The time to prepare for a bear market is when one isn’t near, she says. Rebalance your portfolio when stocks are high to make sure you aren’t taking on unnecessary risk that could leave your belly exposed if a stock market bear appears. A huge part of preparing for a bear market is “understanding what you own and having an honest conversation with yourself about your risk tolerance,” Birk says. To be a successful long-term investor, you need an investment “strategy you can stick with if and when a bear market arrives,” he says.

At PNC Wealth Management, they use goals-based investing to help investors weather choppy markets. The approach keeps you focused on your long-term goals while providing for your short-term needs, which can help you avoid making decisions that prove detrimental over the long-run, Lockyer says.

Think of your long-term investment portfolio as you do your house, Birk says. You don’t fret about short-term fluctuations in the market price of your house because you know you’re not going to sell it tomorrow.