One of the most dangerous things you can do as an investor is to make money – because of what you might do next. And… has the world’s debt been put to good use? It doesn’t seem that way. Those are a few of the messages of legendary investor (and fellow Singapore resident) Jim Rogers, who I’ve had the pleasure of speaking with a few times. In the early 1970s, Rogers co-founded the Quantum Fund, one of the world’s most successful hedge funds. After generating returns of 4,200 percent over 10 years, he quit full-time investing in 1980. 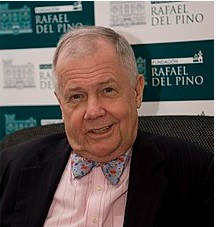 He went on to travel the world two times, and wrote a few books about what he saw and learned. Even if you’re not a travel or money junkie and know little about finance, Investment Biker and Adventure Capitalist are two of the most educational and entertaining books you’ll ever read about investing. And they’re must-reads for anyone interested in understanding how global markets work.

On the danger of making money in markets

I recently re-read parts of Adventure Capitalist, which Rogers wrote in 2003 after a three-year, 152,000-mile (244,600 km) drive around the world, and found a few lessons worth revisiting:

“One of the mistakes that many people make in the stock market is buying something, watching it go up, and thinking they are smart. They find themselves thinking it is easy. They take a big profit and immediately go looking for something else. That’s the time they should really do nothing. Self-confidence leading to hubris leading to arrogance – that is when you really should put the money in the bank and go to the beach for a while until you calm down.

Because there are not many great opportunities that are ever going to come along. But you do not need many if you do not make many mistakes.

”Often, the best thing to do in investing is this: Nothing at all. And part of doing nothing is holding what’s maybe one of the most hated assets of all: Cash. It doesn’t earn anything, inflation eats away at it, central banks can’t stop printing it, and you’re denying yourself the magic of compounding if you’re holding cash. But cash is the perfect hedge. You don’t have to worry about the market crashing if you have a lot of cash. And most importantly, it’s there when you find “money lying in the corner,” as Rogers has said.

When debt is good – and bad

“There’s nothing wrong with borrowing huge amounts of money – as a country, as a family, as an individual – as long as you’re putting it into productive assets, building for the future. In the nineteenth century, the United States borrowed stupendous amounts from all over the world, mainly from Europe. We were a gigantic debtor nation. We put the money into productive infrastructure such as railroads and factories. And by 1914 we got our payoff. We became a creditor nation for the first time in our history. We then became the world’s largest creditor nation and the most powerful country in the world. We borrowed all that money, but we invested it wisely. But if you borrow a lot of money and buy Rolexes and Porches and big houses… you are not going to thrive long term.”

Around five years after Rogers wrote that, the 2008-2009 global economic crisis delivered what should have been a crowbar-to-the-head message about debt: Too much debt is bad. But since then, overall levels of debt haven’t declined. Total lending has actually risen. Here’s what Jim told me about the situation when I spoke with him last year. “Debt worldwide has boomed in the past 30 years, but especially in the past 10 years. In 2008, the world had a big problem because of too much debt.

Japan has staggering internal debts. They have a lot of external reserves, foreign-currency reserves, but they have huge debt and they keep running up debt after debt after debt. I can give you a case that there won’t be a Japan in 50 years. I mean, they have a declining population for the first time in recorded history. The debt is going through the roof. Where are we going to get our sushi in 50 years? It’s a fantastic country, but it’s in serious, serious decline.”

– Read the rest of the interesting article here