Long before streetwear brands like Supreme popularized a business model built on limited-edition drops, the diamond industry used scarcity to drive up the desirability and perceived value of diamonds. There have always been a finite number of these sparkling chunks of carbon in the earth, making them feel all the more special. However, in the past few years, technology has evolved to the point that those same sparkling hunks of carbon can be grown in labs, where scientists have managed to recreate the environment in which diamonds were formed in the earth. And the increasing availability of lab-grown diamonds is fueling widespread change across the industry, with a big influx of jewelry brands using them (and often branding them as a more ethical and sustainable alternative) and at-times-aggressive opposition from proponents of mined jewels. Those on both sides of the lab grown vs. mined debate are often impassioned in their points of view.

What exactly is a lab-grown diamond?

First of all, they aren’t “fake.” Like a mined one, a lab-grown diamond is a tetrahedral crystal of carbon. Despite being grown in a lab, of which there are several across the U.S. and abroad in China, Israel, Singapore, India and beyond, they are chemically and physically identical to a mined diamond.

“It’s like getting ice from your freezer versus getting it from a glacier,” explains Anna-Mieke Anderson, founder of OG lab-grown diamond company MiaDonna. “It doesn’t matter the origin, they are still chemically, physically and optically identical.” Only a reputable diamond grading lab with advanced equipment would be able to distinguish a lab-grown diamond from a mined one. That wasn’t always the case, though. Early iterations of lab-grown diamonds, which were used for industrial purposes rather than jewelry, tended to be brown or yellow in color. Only in the last three to five years has the technology advanced to the point where truly clear or “white” diamonds could be produced, and then cut and polished the same way — and potentially by the same experts — as mined diamonds. 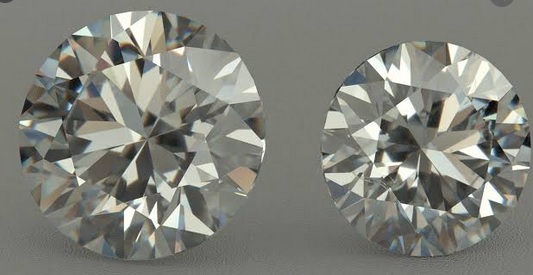 There emerged an opportunity for disruption that has been seized by a number of entrepreneurs and investors, especially over the past couple of years, and especially with goals of luring millennials away from the mined industry with promises of better prices and better treatment of people and the planet. While lab-grown diamonds are 30-50% cheaper than mined ones, the issue of one method being more ethical and sustainable than another is less black and white. But more on that later.

One of the trailblazers in the lab-grown space was MiaDonna; Anderson launched the brand in direct response to the conditions she’d observed in the mined diamond industry. After realizing she had unwittingly purchased a conflict diamond, she decided to sponsor a child who lived in a diamond mining community in Africa, with whom she developed a close relationship via letters.

“I will never forget the day he wrote to me, and he said he had a great summer because only one of his classmates was killed,” she tells me.

As a mother, she says, she couldn’t let this go on. So, she decided she would start selling conflict-free jewelry and use the profits to sponsor more children. She only ended up looking into lab-grown because, at the time, around 2006, she couldn’t find any mined diamonds that she felt 100% confident positioning as conflict-free. She had to experiment with not-quite-clear diamond “hybrids” combining lab-grown and crystals until the technology improved around 2014.

On the philanthropy side, her foundation The Greener Diamond recently purchased 10 acres of “prime diamond mining land” in Liberia, which is being given back to the locals, whom they are training to grow their own food — a trade that had been lost over many years of civil war — so that they don’t have to resort to diamond mining to live, according to Anderson. MiaDonna is also a certified B Corp.

Another business that makes good on its promises of ethical and environmental soundness is Diamond Foundry, which is quickly making a name for itself as the gold standard of lab-grown diamond production. It’s also one of the most famous companies in the lab-grown space because of its famous investor: the “Blood Diamond” star himself, Leonardo DiCaprio. Based in San Francisco and founded by engineers and scientists from MIT and Stanford, Diamond Foundry operates a vertically integrated lab and headquarters in SF and recently opened a second, hydro-powered lab in Washington State. They both house proprietary plasma reactors, in which the diamonds are grown.

“We start with a seed of a diamond inside the machine and the actual diamond grows layer by layer over time in these machines and that becomes the rough diamond. Then we polish and cut it,” explains Mona Sadat Akhavi, a representative for the company. “We really pride ourselves in having a full supply chain from the moment the diamond starts growing, to the moment it’s in the hands of the consumer. We actually manage and control the whole process. And that’s why we can tell the customer that ‘Our diamond’s origin is absolute. You know exactly these diamonds came from America.'” Diamond Foundry also claims to be the only certified carbon neutral diamond lab.